G'day! Steve Savage here again! I've been charged with putting together a dictionary of Aussie slang. Now, us Aussies are a pretty friendly bunch, and we don't mind having a good laugh! But we've got our our way of saying things, and if you don't understand us, you'll feel like a prize drongo. So if you want to be a top bloke or sheila it's worth brushing up on some good ol' Aussie slang!
WE ARE GENERALLY A PRETTY POLITE PEOPLE, BUT SOME OF OUR LOCAL SLANG IS A TAD DISRESPECTFUL. WE CAUTION THAT THE AUSSIE SLANG DICTIONARY BELOW CONTAINS LANGUAGE THAT MAY OFFEND
Down Under, we make frequent use of what are apparently called 'diminutives'. That is to say, we're too lazy to say a whole word, especially if it has more than one or two syllables, so we shorten it. It's just easier that way! Sometimes, we do this by adding -o or -ie to the ends of abbreviated words, such as arvo (afternoon) and servo (service station, known by our American friends as a "gas station") or barbie (barbecue) and bikkie (biscuit).

Also, just to keep you on your toes, we often give no indication when we are joking. Even if making the most extravagant, outrageous or ridiculous statements, we may retain a neutral tone. It is then up to you to decide whether we are serious... or pulling your leg.

A
Aerial Ping Pong- derogatory term for Australian Rules Football
Aggro- Aggressive
Akubra- famous brand of Australian hat
Ambo- Ambulance officer
Apples- okay, fine, as in "she'll be apples" (see also 'Jake')
Arvo- Afternoon. Three syllables is just too many for us. In fact we often shorten it to 'arve'. 'See you at the pub this arve.'
Aussie- An Australian, mate
Aussie Rules- Our own variety of football. If you've never seen it played, watch a game. It's hilarious!


B
B&S Ball- Bachelor's and Spinster's ball, a huge drunken mess where the admission fee usually covers all you can drink. An annual event, and the highlight of the year for many a young bloke or sheila in rural Australia.
Back of Bourke- away from civilization (Bourke is a far inland town)
Barbie- Barbecue. Cooking a barbie is blokes' work, but the sheilas can butter the bread and slice the tomatoes. A quick bit of social ettiquette: immediately upon arrival at a barbie, blokes and sheilas must separate, blokes to gather around the barbie, and sheilas to huddle in the kitchen or around the table. Disregard these rules and risk never being invited to another barbie again!
Barney- Argument, fight, punch-up. Popular at barbies.
Barra- Barramundi, a type of fish. Popular at barbies.
Barrack- to cheer for, or support a team
Bash- social event
Bastard- term of endearment
Battler- poor, hard worker
Beaut- good
Bikie- member of a motorcycle club
Bikkie- Biscuit
Billabong- Waterhole, lagoon
Billy- Metal can to boil tea over a campfire
Biscuit- Cookie
Bitser- Mixed breed, mongrel. Can be applied to inanimate things as well; 'This car's a bitser, it's got a Ford motor in a Chrysler body, with Holden wheels.'
Bitumen- Asphalt
Black Stump- Somewhere in the outback, perhaps even beyond Bourke
Bloke- Man, guy, dude
Bloody - universal adjective, can be used before the noun or before any other adjective
Blotto - Intoxicated, drunk
Blowies - Blowflies. Can also mean something else
Blow-in - Newcomer, recent arrival
Bludger - Lazy person
Blue - 1) Fight get into a blue 2) Mistake make a blue 3) second most popular name for pet dog
Bluey - Cattle dog
Bodgy - Worthless product, or dubious workmanship
Bolt, to do the.. - to leave, especially to leave suddenly
Bonza - very good
Boofhead - Term of endearment
Boomerang - An article lent on the stipulation that it must be returned
Bottle'0 - Bottle shop/ liquor store
Brekkie - Breakfast
Brickie - Bricklayer
Brizzie - Brisbane, my home town
BUCKLEY'S- No chance at all.
Bugger - 1) noun, meaning an unpleasent person 2) verb, meaning to render something incapable of function. There is also a place called 'buggery', and if an Australian suggests you go there, you have been bothering him.
Bullshit - Untrue, exaggerated
Bush - rural area, countryside, woods
Bushbasher - an old car, not suitable for driving on the open road, but perfect for a bit of fun on the back roads or on private property
Bushed - exhausted, tired, worn out
Bushranger - Highwayman, outlaw
Bush Telegraph - Gossip
Bush Tucker - Food gathered from nature


D
Dag- 1) The bits that collect under a sheep's tail 2) A likeable amusing person 3) An uncordinated or unfashionable person. How confusing is that? It's all in the context and the intonation.
Daks- Mens trousers. To sneak up behind someone and pull their pants down is to 'dak' them.
Damper- Basic bush bread made from flour and water, usually cooked in the coals of the campfire
Dead Horse- Tomato sauce, ketchup
Dead-cert- A sure winner
Deadset- a fact, the truth
Dero- Homeless or a street person, abandoned by society, a derelict
Dickhead- Idiot, stupid, fool (like most insults, can aso be used as a term of endearment)
Digger- Australian soldier, veteran
Dill- Idiot, fool
Dingo- Australian wild dog
Dirty- Angry, annoyed
Dinki-di- Genuine, real, honest
Do- Social event
Dog- most popular name for pet dog
Doonah- 1) Duvet, quilt 2) a rather unusual game that my old boss Dennis used to play on weekends away with his mates
Drive through- Drive through liquor barn, where you can buy cold beer without letting go of the steering wheel. Civilization.
Drongo- Inept person
DROP BEARS- (Ed- Don't worry too much about Drop Bears. As long as you smear a generous dollop of Vegemite behind your ears before venturing into the bush, you should be safe.
Dunny- Toilet


E
Ear-bash- to bore or nag
Esky- Insulated cooler box for keeping beer in. Can also be used for food.


F
Fair Dinkum- Good, honest, truthful
Fair go- a chance, an even break, also a fair crack of the whip or a fair suck of the sav (a saveloy sausage, usually served battered)
Footie- Football, can be either Australian Rules Football, or rugby (but not that game they play in England where the players all pat each other's bottoms and kiss one another when they score a goal. That's called soccer!)
Full as a boot- Intoxicated, drunk


I
Idiot Box- Television set
In the shit- In trouble


K
Kark it- Die
Kero- Kerosene
Kiwi- someone from New Zealand. They're not all bad, despite what you hear.
Knackers- Testicles
Knackered- Exhausted, tired, worn out
Knock- To criticize unfairly
Knocker- one who 'knocks' (above)
Knockers- 1) plural of knocker 2) breasts, especially large breasts
Knock off- To finish work for the day.


P
Pash- A passionate kiss- you know, with the tongue
Pat Malone- To be on your Pat Malone means to be on your own
Pearler- something that is most excellent
Perve- to ogle or stare at someone lasciviously
Pie- minced beef inside, pastry outside. Australia's national dish. Goes well with beer.
Piece of piss- Easy, no trouble
Pig's ass- No way, I disagree
Piss- 1) urine 2) Alcohol - when you think about it, there's only twenty minutes between the two.
Pissed- Intoxicated, Drunk, Pissed as a parrot
Plonk- Cheap wine
Pokies- Poker machines
Pollie- Politician
Pom- English person
Pommy shower- to use deoderant instead of bathing
Pong- unpleasant odour
Poofter- Male homosexual
Postie- Postman
Pozzie- Position
Prezzie- Present, gift
Pub- Bar, public house
Punce- effeminate male


Q
Quid- an old pound note, before Australia went to dollars to earn a quid- to make a living not the full quid- slow witted, simple minded


R
Rellies- Relatives
Rack off- get lost, go away
Ratbag- Rogue, rascal
Ratshit- not good
Rego- Vehicle Registration
Ridgy-didge- Genuine, honest, straight
Ripper- great
ROAD TRAIN- A semi-trailer with multiple trailers
Rollie- Cigarette that you hand roll yourself
Ron, to save for …- To save for later on
Root- shag, bonk
Rort- to cheat or defraud the system
Rough- Unreasonable, unfair


S
Salvo's- Salvation Army
Sanger- Sandwich
Sav- Saveloy, a red sausage similar to a frankfurt
Scratchie- Instant lottery ticket
Septic Tank or Seppo- An American (rhyming slang from 'Yank')
Servo- Petrol station
Sheila- Woman
Shonky- Underhanded, suspect
Shoot through- leave, disappear
Shout- round, as in a round of drinks
Sickie- a day off work with real or usually invented illness. If you chuck a sickie to go to a sporting event, make sure your boss doesn't spot you on tele, waving and cheering in the crowd. Hey, it's happened!
Singlet- Undershirt or tank top, referred to unkindly in some parts of America as a 'wife beater', a reflection I guess, on the type of person who favours such a garment as outerwear.
Slab- a package containing 24 tinnies or stubbies of beer.
Smoko- Work break, morning or afternoon tea
Snag- sausage
Sparkie- Electrician
Squiz- look at, inspect (to have a squiz at it)
Stab- attempt (to have a stab at it)
Station- ranch, sheep farm or cattle range, usually the size of a European country
Sticky-beak- Inquisitive person
Stoked- Very pleased, happy
Stone the crows!- an exclamation of surprise
Strides- Trousers
Strewth- an exclamation of surprise
Stubbies- 1) Unfashionable 70's style elastic-waisted men's shorts, favoured by truckies 2) 375ml bottle of beer, favoured by everyone, including truckies
STUBBY COOLER- An insulating sleeve - once made of styrofoam, but now made of neoprene - designed to keep your stubby cold.
Sunnies- Sunglasses
Sus- Suspicious
Swag- bedroll for sleeping in the bush
Swiftie- to fool or cheat someone is 'to put a swiftie over on them'


T
Ta- Thanks
TAB- Totalisator Administrator Board, betting shop. Dress code in your local TAB is very strict: a shirt that used to fit you fifteen years ago when it was kind of in style, a minimum of two inches of ass crack showing above your stubbies, and on your feet- thongs, preferably but not necessarily a matching pair.
Tee up- To organize something or arrange an appointment
Thongs- Rubber sandals, flip flops. Kiwis call them 'jandals'. How gay is that? Not that there's anything wrong with being gay, mind you.
Tinny- 1) Can of beer 2) small aluminium boat 3) unusually lucky
Toey- restless, or horny as in 'toey as a Roman sandal'
Trackie Dacks- Tracksuit pants
Truckie- Truck driver
True Blue- Genuine, honest, trustworthy, original
Tucker- Food
Turn it up!- exclamation of disagreemenet or disbelief
Turps- Alcohol


W
Walkabout- an extended trip, usually with an indeterminate timeframe. I wouldn't know about that.
Wally- Silly person, someone who is clumsy or prone to making mistakes
Wanker- Someone who is full of themselves, or egotistical
Whacko!- an exclamation of delight
Willy willy- a small whirlwind
Wog- 1) flu or cold 2) person of Italian or Greek descent (not a polite term, in case you needed to be warned. You don't want to be walking into the corner fish and chip shop in Melbourne and addressing the proprietor as your wog.)
Wombat- eats roots and leaves (see 'root')
Woop woop- A long way from civilization (remember the Black Stump? Well, it's out woop woop!)
Wuss- Coward


X
XXXX- Queensland's own beer, brewed just a few miles from where I lived. It's pronounced 'fourex' too, not 'ex ex ex ex'. The southerners say we called it XXXX because we can't spell beer. I say they should stay down south and mind their own business.


Z
Well, what the hell starts with 'Z' anyway?

A WORD OF WARNING:
Don't go hurling the phrase "Throw another shrimp on the barbie" around too much. That was a slogan concocted by the Australian Tourist Commission for an advertising campaign aimed at Americans. We don't know what 'shrimps' are... they're called prawns! 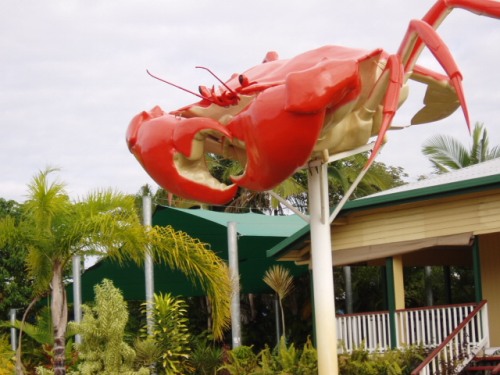 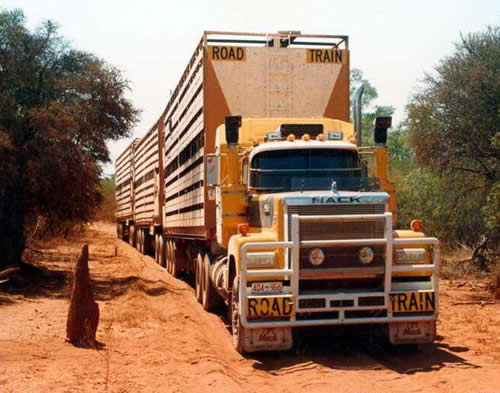 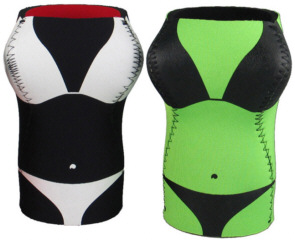